This from Guobin Yang of Barnard College, Columbia University, in The New York Times:

Protest is also increasingly common on the Internet. I recently counted 60 major cases of online activism, ranging from extensive blogging to heavily trafficked forums to petitions, in 2009 and 2010 alone. Yet these protests are reformist, not revolutionary. They are usually local, centering on corrupt government officials and specific injustices against Chinese citizens, and the participants in different movements do not connect with one another, because the government forbids broad-based coalitions for large-scale social movements.

Because of those political limits, protesters express modest and concrete goals rather than demand total change. And the plural nature of Chinese society means that citizens have sometimes conflicting interests, making it difficult to form any overarching oppositional ideology. In other words, the government allows a certain level of local unrest as long as it knows it can keep that activism from spreading.

And while the Internet has revolutionary potential, here too Chinese leaders have a firm grasp of the situation: they understand the power of the Internet much better than their Middle Eastern counterparts, and they regularly restrict access to the Web when they sense that unrest is gaining momentum.

Great column, but this segment just nails what I keep trying to tell people in response to questions about a Middle East/North Africa contagion. 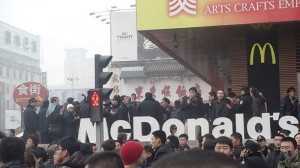