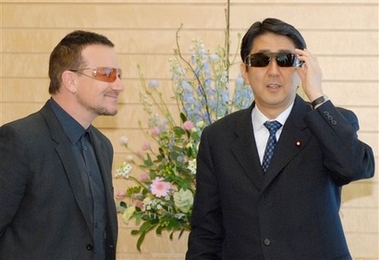 If an English-language article about Koizumi Junichiro ever appeared without the word “maverick,” I didn’t notice. But now Abe Shinzo might get to be one of the cool kids too. Bono praised Japan for its anti-poverty funding in the ’90s and its aid in Southeast Asia after meeting Abe Wednesday. And he may have called the new prime minister “cool.”

Reuters asserts that Bono was calling Abe cool, but I think he might have been referring to the act of putting on the sunglasses, not the politician himself. One way or another, we know Bono locates Abe on the “cool” scale somewhere between Koizumi and Bush, because he said he was disappointed not to have discussed music with Abe as he had with the Maverick. Not to worry, Bono said, “Next meeting, I’ll get him on that.”