This post was continually updated today as I found good or interesting material on Chinese Vice President Xi Jinping’s visit to the White House, the State Department, and the Pentagon.

Last update today. Off to CFR and then offline for the evening.

The White House has posted a transcript of Obama’s remarks, as well as the “Joint Fact Sheet on Strengthening U.S.-China Economic Relations.”

Neither document is especially surprising. I noted earlier that Obama said he welcomes China’s “peaceful rise,” a reference to an earlier rhetoric associated with Zheng Bijian. A quick look reveals that “we welcome the peaceful rise of China” has been something of a talking point. See this from November.

The economic relations document is what it sounds like, focusing exclusively on economic issues. It will take some comparison to other statements in the past to assess the significance of this document. And remember, Xi isn’t president yet.

MSNBC has posted video of Obama’s appearance with Xi Jinping:

Visit msnbc.com for breaking news, world news, and news about the economy

The U.S. Congressional-Executive Commission on China has released its statement on Xi Jinping’s visit. It is predictably focused on human rights concerns, the major activity of the CECC:

“[W]e remain extremely concerned, as the run-up to Vice President Xi becoming the next leader of China has been accompanied by one of the worst crackdowns in recent memory,” said Representative Chris Smith, Chairman of the Commission. “Beyond that, China’s oppression of house churches, censorship of the Internet, and one-child policy continues unabated.”

“As China’s likely next leader, Vice President Xi has a unique opportunity to improve relations with the United States,” said Senator Sherrod Brown, Cochairman of the Commission. “But in order to win the respect of the American people, Vice President Xi must make every effort to ensure China plays by the rules, abides by its international obligations, and guarantees the fundamental rights of all its citizens.”

The release also targeted China on trade and labor conditions:

They noted that the WTO recently decided that Chinese restrictions on raw material exports violate WTO rules. “The WTO decision on raw materials is just further evidence of the Chinese government’s willingness to cheat and game the system at the expense of our companies and our workers,” said Chairman Smith.

The full text is not online yet, so I’ve posted it here.

Obama: “We welcome China’s peaceful rise.” … “We believe that a strong and prosperous China is one that can help to bring stability and prosperity to the region and to the world.”

Xi: Xi said he hoped his trip would build on the progress made by Obama and Hu during a state visit by China’s president a year ago, in building a “cooperative partnership based on mutual respect and mutual benefit.” He said he looked forward to having “an in-depth and candid exchange of views.”

Getty has some early images of Xi’s meeting with Biden today, and with Obama. This link will return the latest.

Of course, the very best thing published today on China and the United States has just come out at Al Jazeera English. #shamelessplug

POLITICO has an op-ed by Reps. Rick Larsen (D-Wash.) and Charles Boustany (R-La.),  the co-chairmen of U.S.-China the Working Group. It’s a laundry list of issues, pushing for  greater cooperation in name. The full text is concilatory, but the policy points read like a list of demands:

The Obama administration and its Chinese counterparts must focus on developing a bilateral investment treaty. …

Beijing must accede to the Government Procurement Agreement within the World Trade Organization. …

Beijing must also work to protect the intellectual property rights of U.S. companies, as well as Chinese firms. … 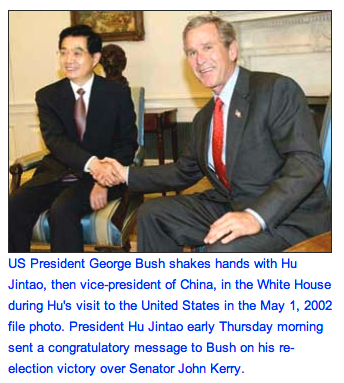 From China's mission to the United Nations (click for article)

5 thoughts on “Xi Jinping in Washington: A roundup/liveblog”