[This review is part of a new experiment. I have read for general impressions, main points, and potentially useful material for myself and others. This is not a detailed methodological or theoretical examination, nor is it a conscientious summary. I have tried to consider both specialist and generalist audiences. Comments are very welcome, as I hope to be doing this more often. -Graham] 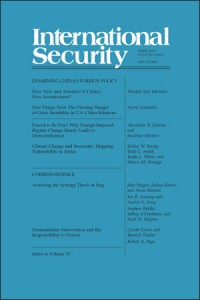 Iain Johnston’s recent article in International Security recalls one of my favorite teaching pieces, which Johnston co-authored with Sheena Chestnut: “Is China Rising?” In that piece, Johnston and Chestnut asked the title question at a time when scholars, journalists, and pundits were instead asking about the implications of China’s rise. The new piece takes a similar tack, arguing that while “the new assertiveness meme has ‘gone viral,'” the evidence does not bear out a clear “assertive” turn in Chinese foreign policy.

Focusing on 2010, Johnston lays out seven areas in which China is supposed to have been more assertive and concludes that in most cases, a perception of new assertiveness is produced by one of a few mistakes. One is the classic cherry-picking problem (“selecting on the dependent variable”), in which arguments are based on instances that appear to support the assertiveness claim without examining those that might indicate cooperation. But the best of the argument comes in the one-by-one examination of seven major areas of supposed assertiveness, each of which has its problems. Johnston summarizes:

These seven major events in Chinese foreign policy in 2012 represent a mixture of new assertiveness (South China Sea); old assertiveness with a twist (the threat to sanction U.S. arms manufacturers that sell to Taiwan); reduced assertiveness (the Dalai Lama visit); probably predictable responses to exogenous shocks (Senkaku/Diaoyudao incident); the continuation of reactive/passive policies in the face of changed and less-hospitable diplomatic circumstances (Copenhagen, DPRK policy); and in one case, empirical inaccuracy (the South China Sea as a core interest claim). In toto, the differences across these cases suggest that there was no across-the-board new assertiveness in Chinese diplomacy in 2010 (31–32).

These points are generally well-made, and readers interested in any part of that laundry list might wish to engage with the details in the article. The article also examines four common explanations of the supposed new assertiveness (under “Problematic Causal Arguments”): change in the distribution of power; rising Chinese nationalism; the politics of leadership transition; and the power of the PLA.

I think two parts of the paper deserve highlighting as valuable regardless of the overall argument.

A Swing and a Miss

The only response I had seen to this paper was from Daniel W. Drezner, the Tufts professor and Foreign Policy blogger. Drezner seized on passing references in Johnston’s introduction and conclusion, in which he speculates that this mistaken “new assertiveness” meme results from “a new, but poorly understood, factor in international relations—namely, the speed with which new conventional wisdoms are created, at least within the public sphere, by the interaction of the internet-based traditional media and the blogosphere” (46–47). An interesting thought.

Though Johnston marshals a few references in support of this notion, he really doesn’t make the case. As Drezner writes: “What’s ironic about this is that in the article, Johnston properly takes a lot of the conventional wisdom to task for ahistoricism and problematic causal arguments in assessing Chinese behavior after 2008.  I’d wager, however, that Johnston has done the exact same thing with respect to the foreign policy blogosphere.”

This is a fair critique, as far as the text concerned goes. At very least, if Johnston is right, he has not made a very solid case and has not provided solid comparisons with the past. But this is a bit of a sideshow, given that the speed-of-groupthink argument subsumes a total of three paragraphs out of 41 pages. I’d like to see more recent work on this point, work I’m sure is out there or in progress.

Who Should Read This

Johnston has written a rare work of international relations scholarship that can serve as a direct intervention in foreign policy discourse outside academia. Sure, a 1,500-word version might be more digestible, but general international politics readers should have no trouble following.

Journalists, too, should give this one a read. Just like the “rise of China,” “China’s new assertiveness” comes easily to the keyboard. It also comes out of sources’ lips frequently. This article reviews one big idea and several small ideas that deserve a follow-up or qualification.

I feel compelled by the norms of journalism, though not the norms of scholarship, to note that Johnston was my professor one semester in grad school. We don’t always agree with our teachers, but they do help form our views, so take this all with whatever grain of salt you like.