A special note: From Washington, D.C., this week, this is the ninth and last “beta” edition of U.S.–China Week before a wider launch next week. My sincere thanks go to all who have read these early issues and especially to those who have sent me valuable feedback. Still, your comments or quibbles are very much appreciated. Encourage your friends to subscribe to the list. Follow me on Twitter at @gwbstr. And you can find a copy of this issue at Transpacifica.net.

President Barack Obama gave a long response to a question about China during a trip to Jamaica. It should be read in full, but this part made news: “Where we get concerned with China is where it is not necessarily abiding by international norms and rules, and is using its size and muscle to force countries into subordinate positions. And that’s the concern we have around maritime issues.” This remark came at a time when U.S. mainstream media and editorial writers have taken renewed interest in the South China Sea. Chinese Foreign Ministry spokesperson Hua Chunying’s one-liner: “Speaking of ‘size and muscle’, I believe everyone knows well who has the largest ‘size and muscle’ in the world.” U.S. Secretary of Defense Ash Carter, in Tokyo, also expressed U.S. concern about the South China Sea.

ANALYSIS: The U.S. government has upped the rhetorical ante regarding Chinese activities in the South China Sea at a time when global media have locked on to China’s rapid island building efforts there. This attention is fueled in no small part by the excellent Asia Maritime Transparency Initiative at CSIS, and it has meshed well with rising alarm about China’s maritime military capabilities. The unresolved question remains: What should the U.S. goal be here, and how can that goal match U.S. abilities and resolve?

China’s government has most likely installed a new set of offensive technologies alongside the basically defensive “Great Firewall” system, according to a timelytechnical report by the respected Citizen Lab research group in Toronto. The new system, dubbed “Great Cannon,” was apparently behind the hijacking of foreign web traffic that recently flooded the website GitHub with requests and significantly decreased its performance. (See last week’s brief.) Based on the report, the new capability allows its controllers “to deliver exploits targeting any foreign computer that communicates with any China-based website not fully utilizing HTTPS.” That means almost every connection to a Chinese website we make from abroad.

ANALYSIS: As the report notes, the initial use of this capability seems pretty basic: a classic “denial of service” attack on a website associated with (though not devoted to) spreading “sensitive” information in China. It could likely be configured to deliver surveillance packages or other exploits, however, making the Chinese border a potentially perilous place. Meanwhile, the U.S. government’s objections will continue to be undermined by revelations about its own behavior.

Secretary of Homeland Security Jeh Johnson met in Beijing with Minister of Public Security Guo Shengkun, producing enthusiastic Chinese coverage, reporting that the United States would streamline procedures for repatriating corrupt Chinese officials (China Daily). The DHS readout, as well as a Xinhua report, emphasized a variety of issues including counterterrorism and container security. Johnson also met with China’s cyberspace chief Lu Wei. DHS made the repatriation agreement sound pretty bland, saying they “agreed to a more streamlined process to repatriate Chinese nationals with final orders of removal, while applications for protection will continue to be handled in accordance with U.S. law and American values.”

ANALYSIS: It’s not clear to me that the DHS statement would significantly speed things up on the U.S. side. To repatriate an accused official (or anyone else), they still require a “final order of removal”—the result of a proceeding that reviews an initial order of removal. The “applications for protection” probably refer to asylum claims, which can come into play even after “final orders.” The real question: How would the U.S. government start deportation efforts against Chinese corruption suspects? Would DHS or IRS or DoJ be instructed to investigate them based on a Chinese list?

Hillary Clinton’s Twitter account sent the below tweet just a few days before she announced for president, linking to this story by Andrew Jacobs. In the last few hours, all five have been released, though it is unclear at time of writing whether they have been released “unconditionally,” as Secretary of State John Kerry also insistedthis week. 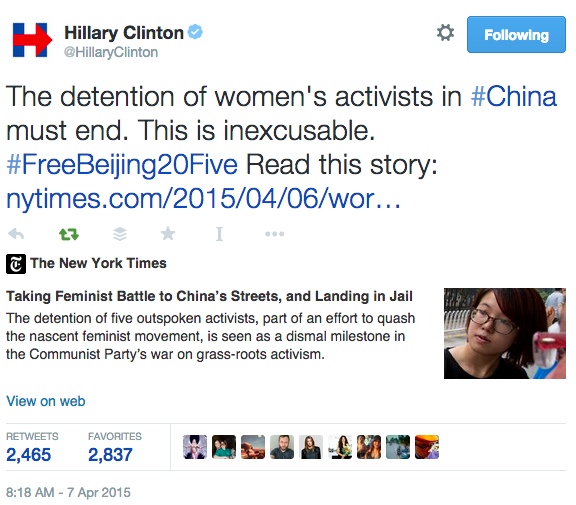 ANALYSIS: This begins the Campaign 2016 China watch. How will the candidates address or ignore China? Here, Hillary Clinton and team seem to have found a way to be “hard on China” in a way that recalls Clinton’s 2007 statement that she “stood up” to China at the 1995 UN Conference on Women. As for China, MFA spokesperson Hong Lei said: “The U.S. presidential election is an internal affair of the U.S.” Nonetheless, it has wider implications.

Robert Blackwill and Ashley Tellis, in a new Council on Foreign Relations report[pdf], declare that “the likelihood of a long-term strategic rivalry between Beijing and Washington is high” and argue that the United States should adopt a grand strategy toward China that puts U.S. preeminence first. The policies Blackwill and Tellis propose would deliberately isolate China, to the extent possible, in economic, political, and military spheres. They meanwhile imply the Strategic & Economic Dialogue should be discontinued and replaced with intensified high-level diplomacy and a special non-governmental backchannel. The authors are careful to note they do not advocate “containment,” but their recommendations are about as close as you could get, given global economic integration.

ANALYSIS: Neither author is a China specialist (not necessarily a demerit), though they draw on the insights of a distinguished cast from a CFR study group. The report, however, is in stark disagreement with at least several of that group’s members. References to “strategic reassurance,” for instance, are a swipe at group member James Steinberg’s recent book, which advocates for that approach alongside “resolve.” Tellis and Blackwill seem to prefer just “resolve.” Their arguments will be widely read and will reinforce some of the darkest Chinese suspicions.