The speech is out on Medium well before it begins.

There are two mentions of China and one of “Beijing,” none of Japan, two of Asia (not counting one reference to Asians as an ethnic group), and none of Korea. 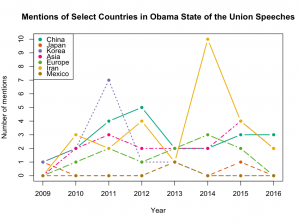 China appears in seemingly contradictory senses, in both cases for its economy. In pushing for passage of the Trans-Pacific Partnership, Obama is slated to again raise the specter of Chinese economic rule-making power. In the other context, the potential for a foundering Chinese economy is listed as a nontraditional threat.

Far from a threat due to strength, the first direct mention of China comes in context of potential weaknesses in the economy:

In today’s world, we’re threatened less by evil empires and more by failing states. The Middle East is going through a transformation that will play out for a generation, rooted in conflicts that date back millennia. Economic headwinds blow from a Chinese economy in transition.

China appears again in the context of keeping it from setting the rules.

That’s how we forged a Trans-Pacific Partnership to open markets, protect workers and the environment, and advance American leadership in Asia. It cuts 18,000 taxes on products Made in America, and supports more good jobs. With TPP, China doesn’t set the rules in that region, we do. You want to show our strength in this century? Approve this agreement. Give us the tools to enforce it.

Before that, Obama denies the narrative of a declining United States, and mentions “Beijing” as an alternative.

I told you earlier all the talk of America’s economic decline is political hot air. Well, so is all the rhetoric you hear about our enemies getting stronger and America getting weaker. The United States of America is the most powerful nation on Earth. Period. It’s not even close. We spend more on our military than the next eight nations combined. Our troops are the finest fighting force in the history of the world. No nation dares to attack us or our allies because they know that’s the path to ruin. Surveys show our standing around the world is higher than when I was elected to this office, and when it comes to every important international issue, people of the world do not look to Beijing or Moscow to lead — they call us.