Viewing U.S. presidential politics from thousands of miles away is a bit of a relief for someone like me. But I still enjoy watching the debates in webcast form to keep an eye on the tone of competition. I should say, I enjoyed it. Heading over to MSNBC.com to catch up on the recent Democratic debate, I was stopped at the door for holding the wrong internet passport: 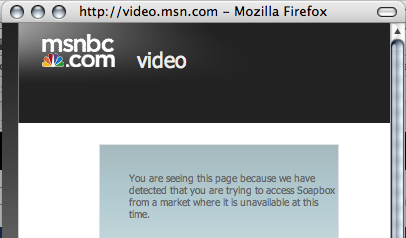 MSNBC is not the only site to block visitors from some countries. The music site Rhapsody refuses me service while in China. Google Video also refuses my requests, though it at least apologizes:

Thanks for your interest in Google Video.

Currently, the playback feature of Google Video isn’t available in your country.

We hope to make this feature available more widely in the future, and we really appreciate your patience.

These are just the few cases I can remember off the top of my head. Many other sites have refused service since I moved to China. As of now, I don’t know how far-reaching these restrictions are, but I don’t have any reason to believe it’s just China. I have some memory of reading about sites that only work in the United States or their home country.

There are several possibilities as to why this happens. Here are a few:

Amidst recent rumors about Facebook‘s possible entry into the Chinese market with a facebook.cn service, some very smart people have been remarking on a “silo” effect when national networks are created for otherwise transnational services, making cross-border communication more difficult. As Rebecca MacKinnon writes:

If they do end up having to create different Facebook “silos” in order to be compliant with Chinese government censorship requirements (and maybe other governments with other language services too), it isn’t just a missed opportunity to provide a great global, multilingual service that many people would find incredibly exciting.

The silo-ing of social networking sites like Facebook (and MySpace China already) is a sadly missed opportunity to build bridges of communication and understanding between the Chinese-speaking world and the English-speaking world.

The same applies when information is limited to borders. The key here of course is that these decisions are business decisions. MySpace, Facebook, and MSNBC are designed to make money from their audience, not foster international connections. I just hope they find ways to do both.

1 thought on “MSNBC Foils Debate Viewers in China (Plus: Facebook.cn?)”