Warning: not about anything particularly Transpacific.

For some weeks, I found blogging overwhelming. For someone who gets significant income writing a blog affiliated with a major tech news site and committed to developing this site, this is a disconcerting phenomenon.

So I decided to take drastic measures. Google Reader had grown unmanageable. At somewhere around 185 feeds and more than 1,000 entries on an average day, I decided it was time to start deleting things. After a painstaking process of removing everything I could bare to, I’m down to about 150. That’s still a lot of traffic, but by removing high-traffic feeds that tended to include doubled content from other feeds, I have cut my RSS reading stress by a huge margin.

Finally, I’ve cut in half the Transpacifica blogroll. Before I had up here a list of things that at times sought to be comprehensive. I’ve realized that’s impossible and I’m not the guy to do it. Not that we might not spend time profiling other sites in the future and enlarge the list, but sites like China Law Blog are doing a good job already highlighting newcomers and lesser-known sites. What you see on the right now is a culled list, though possibly incomplete, of what I see as key sites, admittedly China-heavy, that engage transpacific issues.

We’ll see how much time passes before I give in and start adding feeds again. Until the feed medium advances in some radical ways, this will be an endless battle.

Fabio Rojas has a post at orgtheory confirming what I’ve always suspected about academic stardom: apply one discipline’s vocabulary to another discipline, and you look original. Rojas, an Indiana University sociologist, approves only if the new language also comes with new ideas and truly adds to the body of knowledge. Sounds right to me.

For a long time the RSS feed of indexed, with its index card distillations of popular sentiment, has been a favorite of mine. Today I happened to notice a link to this video on the indexed website. It’s an exceedingly complicated yet digestible narrative of many of indexed author Jessica Hagy’s entries.

I just recently noticed this entry, too: 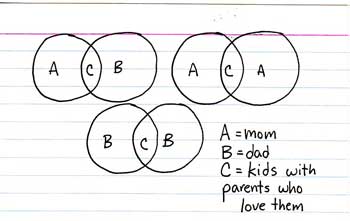 And you know I’ve been living in D.C. too long when this sounds somewhat normal. From a commenter: “t3knomanser said… Am I the only person who saw that and thought, “Wait- isn’t that biased in favor of the nuclear family?” 6:53 AM

I and my colleague Ben Adler interviewed Montana Gov. Brian Schweitzer for CampusProgress.org a few weeks ago, and it went up last night. Ben asked him about his dress code after he famously showed up in D.C. with a bolo tie. After telling us about the jeans he was wearing at the office, I told him he should bring the dress code with him if he ever moves to D.C.

I like what he had to say about the attitude toward politics in the Rockies:

There’s a lot of talk here in Washington about whether the Rocky Mountain West, a traditionally conservative region, is going to open up and turn purple or blue. Do you think it will, and if so, why?

In the Rocky Mountain West, we have a tradition of libertarian populists. And out here in Montana, we didn’t like the notion of having this PATRIOT Act that allows the federal government to spy on us and collect a lot of other financial information about law abiding citizens. We didn’t have to see the report come out to see that the FBI would abuse this—every time they’ve been given this power in the past, they have, and they did again this time.

And the greatest thing about Montana and the Rocky Mountain West is that you’re never more than 30 minutes from great trout fishing. You’re never more than 30 minutes from a place where you can hike. You can raise a family, and that family not only will grow up being able to camp, hunt, and fish, but to hike in some of the most pristine places left on the planet, drink the water and eat the fish that you catch in that stream.

We want to protect that, so when Washington, D.C., has notions about coming out here and digging up all of Montana and drilling wells everyplace that we’ve got across the state, saying, “Well, we need your energy and we’re willing to sacrifice your backyard,” folks in Montana say, “No, I don’t think so.” We could produce our energy with alternative energy; We don’t want you to destroy our backyard. [more]

This is the first of what promises to be many short essays on topics not related to the transpacific triangle. I’ll cut them off after their introductions to spare uninterested readers the details.

John O. McGinnis, a law professor at Northwestern (whom I’ve never met), writes over the summer in Policy Review that “we are on the cusp of a golden age of social science empiricism that will help bring a greater measure of agreement on the consequences of public policy.”

It’s a bold statement. Reasonably, I think, I expected it to be backed by some empirical evidence. Alas, I was disappointed.
END_OF_DOCUMENT_TOKEN_TO_BE_REPLACED