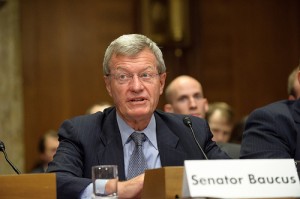 In a news cycle guaranteed to be dominated by President Barack Obama’s State of the Union, Senator and Ambassador to China–designate Max Baucus visited the Senate Foreign Relations Committee for his confirmation hearing this week (video). His opening statement was relatively bland, and the atmosphere among veterans of the Senate was mostly chummy, even though Senator John McCain took the opportunity to make a speech about the risk of a World War I–like situation in East Asia. But media soon reported that Baucus was distancing himself from the White House’s careful acceptance of Chinese President Xi Jinping’s “new type of great power relations” (新型大国关系) concept.

He even said the US should be “very wary” of President Xi Jinping’s frequent call for Beijing and Washington to develop a “new type of major-power relationship”, saying the model was “not an approach that makes sense to me”. He said his approach to Beijing would be “cautious” and he agreed with Republican Senator John McCain that China was trying to be the dominant power in Asia.

Baucus distanced himself from President Xi Jinping’s frequent calls for China and the United States to develop a “new type of major-power relationship.” President Barack Obama’s administration had initially welcomed Xi’s theme, which some US experts saw as innocuous and vague but others viewed with suspicion.

Under questioning, Baucus said that the United States “should be very wary” of Xi’s new relationship model which “is not an approach that makes sense to me.”

“It’s frankly one that suggests that China take care of its own issues in China, whether it’s the human rights issues, or whether it’s Taiwan” or islands contested with Japan, Baucus said.

In reality, Baucus made somewhat more subtle comments that might be even more problematic from the Chinese side. Since the official transcript isn’t out yet, I have transcribed the pertinent section, which runs from about 36:30 to 40:50 in the video. Key statements in bold, and any corrections or comments welcome. What emerges is that, first, Baucus in this answer did not use the full phrase “new type of great power relations” or the White House version, “new model of major country relations.” [My typo there on of/for. -gw] He did, however, appear to agree with or accept the premise of a question from Foreign Affairs Committee Chairman Robert Menendez, and he said he’s sure Obama agrees, even though he hasn’t checked:

MENENDEZ: You are extremely well versed in all of the economic trade and related issues and I think as someone who’s had the privilege of sitting on the Finance Committee under your chairmanship, I’ve seen that first hand. But as you recognized in your opening statements, this is a pretty comprehensive portfolio with China. And in that regard I’d like to visit with you on one or two things. One is China continues to refer to a “new type of great power relationship,” and I wonder what you think China means by that. And is that China laying down a marker for saying, “Hey, we have a greater say in our backyard,” so to speak? And what should America’s counter be? Should we even be using that phrase? What are your views on that?

BAUCUS … It is imperative that we in America be deeper involved in the Asia-Pacific. The rebalancing mentioned by our president … I think is critical. Because the United States and Chinese relationship is so [valid/valuable?] to solving problems not just in China and America but worldwide. China talks about a new relationship. I think it’s always interesting and somewhat helpful to talk about new relationships, to look forward to try to find something new and something afresh—like Chinese New Year, [the] first of any new year.

But China’s interpretation of the new relationship as I understand it, that is revolving around its, as it says, its core interests is one that I think we should be very wary of. As I understand China’s interpretation of the new relationship and focus on its core interests, it’s frankly one that suggests that China take care of its own issues in China, whether the human rights issues, or whether it’s Taiwan, or its the Senkaku Islands—Diaoyu in their version—or the South China Sea. And that’s essentially a version where China takes care of its part of the world and the rest of the countries take care of their parts of the world. That is not an approach that makes sense to me. That’s not an approach which makes sense, I’m sure, to the president, though we’ve not talked specifically about this.

The approach that makes sense is for the United States to urge China to be a full member of and participate fully in the United Nations, rule of law, to resolve issues according to international rule of law principles and norms and that includes work with the United Nations with respect to North Korea, United Nations with respect to Syria and Iran. It means open skies, open seas to maintain security in the world. Half of the commercial tonnage shipped in the world today crosses through the Straits [sic.] of Malacca in the South China Sea. It’s extremely important that the United States stays engaged in the world and helps work with China. The approach to China should be—it’s very simple at this point—it’s positive, it’s cooperative, we work to constructive results. But one grounded in reality. We stand up for our principles, stand up for our principles as we work and engage China.

It is perhaps not the best sign when a nominee gives his own view of the intentions of a foreign leader, and then says he’s confident his president agrees, just before admitting he hasn’t checked. Perhaps more concerning is the fact that Obama has actually explicitly embraced the concept of a “new model of major country relations. A joint fact sheet published by the Chinese government and the White House in December begins: “Building on President Barack Obama and President Xi Jinping’s shared commitment to building a new model of major country relations, both countries affirm their commitment to practical cooperation for the benefit of our two economies and to address global economic challenges” (emphasis added).

This is a big course change for Baucus, and there is a lot of subtlety to take on board. It seems more likely he is still in the orientation phase rather than making a break from the administration, and perhaps White House officials did not take as much time to prepare a nominee virtually guaranteed to be confirmed. But those inside and outside the government in China watch carefully for changes in language, so we will have to see what develops.