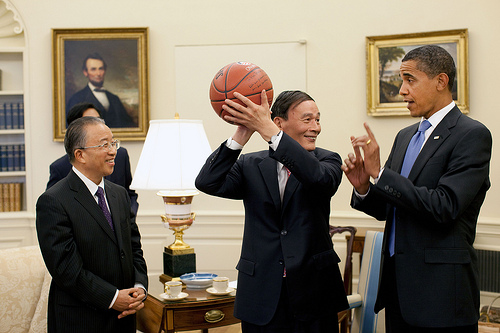 Economic prosperity and basketball. Those are two things neither the United States nor China could seem to live without these days. This by way of mentioning the White House Flickr feed, which is pretty cool. Here, “Chinese Vice Premier Wang Qishan, center, holds the autographed basketball given to him by President Barack Obama following their Oval Office meeting Tuesday, July 28, 2009, to discuss the outcomes of the first U.S.-China Strategic and Economic Dialogue. Looking on at left is Chinese State Councilor Dai Bingguo.”

The economy will be at the center of the U.S.–China relationship in the Obama administration, but a “comprehensive dialogue” is necessary. That’s the word from U.S. Secretary of State Hillary Clinton, speaking with reporters recently. The transcript is, strangely, undated.

QUESTION: Madame Secretary, your colleague – now your colleague, Tim Geithner, raised some eyebrows with comments he made about China in his written testimony to the Senate. And I know that you are interested in the State Department having a robust role in economics as well as diplomacy. My question is about China. Should we read anything broader into what he said? Could we expect the Administration to have a slightly more vigorous diplomacy toward China? And also, what role do you see for the State Department in that relationship? Would you like to see State be the central player? I know under Mr. Paulson, he sort of consolidated a lot of that at the Treasury Department.

So we’re going to be working together in the government across our agencies to design a more comprehensive approach that we think will be more in keeping with the important role that China is playing and will be playing as both a regional and international player on so many important issues.

So I look forward to working with my colleagues in government, in the White House, Treasury Department, and elsewhere, in forging such an approach. And I look very much forward to working with my counterparts in the Chinese Government, because I think there is – there are many opportunities for us to cooperate going forward.
And given the current global economic crisis, you know, we have to work our way through that with the minimum amount of damage to global capacity to restart the economy. You know, obviously, our economic problems here at home mean that people are being laid off not only here in America, but also in China. And so the economy will always be a centerpiece of our relationship, but we want it to be part of a broader agenda, and that’s what we’re working to achieve.