I’m in transit these days, moving for the time being from Seattle to New York. This is a perfect opportunity to look back on what I’ve written in this space since I started here just over five years ago, on Aug. 18, 2006. Looking back, I found some early speculation about what Aso Taro, then foreign minister, would do if he became prime minister of Japan.

This blog began as “Transpacific Triangle,” focusing specifically on the relations among the three largest Pacific powers: the United States, Japan, and China. In 2006, I had studied Japanese in college and in Japan, and I had just spent a ton of energy understanding the April 2005 anti-Japan protests in China for my undergraduate thesis.

Since then, we have seen five Japanese prime ministers, and a sixth is on deck: Noda Yoshihiko.

Aso Taro didn’t become prime minister back when he was running for the presidency of the Liberal Democratic Party in 2006. As expected, Abe Shinzō took over in Sept. 2006 after Koizumi Jun’ichirō’s long term. Aso did have his turn, however, two leaders later in 2008.

What’s striking looking back is how little anyone talks about the Yasukuni Shrine issue anymore. Sino-Japanese nationalism is more pronounced these days over issues like the supply of rare earth elements—though a Xinhua report did strike a relatively stern note instructing the incoming Prime Minister Noda on how to act.

The same day that he declared his candidacy for LDP president (and presumably prime minister) Japanese Foreign Minister Aso Taro said he would work to improve ties with China and South Korea if he becomes prime minister. Aso is viewed as a long-shot candidate in the Sept. 20 election, with Chief Cabinet Secretary Abe Shinzo the presumptive winner.

“Having no meetings between leaders at all is a distorted form of diplomacy and we must correct this,” Aso said, according to Reuters. Aso has been more flexible than Abe on the Yasukuni Shrine question. He has even proposed that the shrine be re-nationalized as a secular war memorial. Some have remarked that the proposal is insane, but to my mind, Aso has apparently been relatively shrewd in his handling of the Yasukuni issue. By renationalizing the shrine, the government would wrest control of the symbolic site from the private Shinto authorities who enshrined the war criminals in the first place and currently administer the controversial Yushukan war museum.

Meanwhile, Aso struck a familiar nationalist note when announcing his proposal, saying “the tens of thousands of soldiers who died crying ‘Long Life to the Emperor’ filled those words with deep emotion, so I strongly pray that the emperor can visit Yasukuni.” This last statement is no personal sentiment. The special status of Yasukuni Shrine as the place where the emperor, who was at the time considered holy, prayed for war dead was fundamental to its rise in importance during what Japan called the Greater East Asian War. When the Meiji authorities built the shrine on Kudan Hill, across the street from the imperial palace grounds, proximity to the emperor was key.

By taking control away from the Shinto authorities and at the same time encouraging an emperor’s visit, Aso might be appealing to both sides of the Yasukuni debate. Abe appeals only to the nationalists on the issue.
But there is still no indication that disenshrining the war criminals is possible, and even before he introduced this new plan, Aso was agitating for Emperor Akihito to visit the shrine. If Hirohito stopped visiting the shrine after it was tarnished by the war criminals (as was recently confirmed by newly available documents), why would Akihito reverse this decision?

Over the next few days, I’ll cue up some other past posts, not necessarily this old. Much has changed in five years, but much has remained the same. If I have some peace and quiet, I might even do a “why I blog” post like Climate Progress has for its fifth year.

Fukuda tells the Washington Post that Asia is Japan’s top responsibility, sending a signal to the United States on Japan’s expired Afghanistan refueling mission. This is also a departure from Abe and Aso’s aspiration to “Eurasian” reach.

It wasn’t too long ago that then-Foreign Minister Aso Taro declared that Japan would work for an “arc of freedom and prosperity” (自由と繁栄の弧) reaching across the Eurasian landmass. Aso’s rhetoric, which was to set out a foreign policy framework for the newly minted premiership of Abe Shinzo, made some people uncomfortable because of its echoes of history—no doubt partially because of Abe and Aso’s general hawkishness.

Now, after the implosion of the Abe government and the rocky start for Prime Minister Fukuda Yasuo, a man who was initially seen as an agent for stability, Japan is changing its foreign policy footing. Ahead of Fukuda’s first visit to the United States as prime minister, he gave an interview to the Washington Post. “I believe the heaviest responsibility for Japan is to see to it that there is stability and prosperity in Asia,” Fukuda said, while also calling the U.S.–Japan alliance the “very foundation” of his foreign policy.

Japanese-U.S. ties have been destabilized (if only slightly) recently by the refusal of the Japanese legislature, where the upper house is controlled by Japan’s opposition, to renew Japan’s refueling mission in support of a primarily U.S. military action in Afghanistan. Predictably, this drew attention from U.S. Defense Secretary Robert Gates on his trip to Asia last week. But as Tobias Harris writes, changes in China loom large in the U.S.–Japan alliance. Here’s Tobias, quoting Gates’ speech last week at Sofia University in Tokyo:

Most pressingly, the alliance has yet to coordinate an approach to China. To some, it is a bulwark against China. To others—and I think it’s safe to include Mr. Gates in this category—the stronger the U.S.–Japan alliance, the better able it will be to reach out to China and work on incorporating China into the regional security architecture. As Mr. Gates says of China, “I do not see China as a strategic adversary. It is a competitor in some respects and partner in others. While we candidly acknowledge our differences, it is important to strengthen communications and to engage the Chinese on all facets of our relationship to build mutual understanding and confidence.”

Fukuda’s emphasis on Asia, if not an isolated statement, could represent at least an orientation toward improving its relations with regional powers. It certainly would seem to reflect the reality of Japanese politics over involvement with U.S. military action.

Footnote: Gates’ not-adversary-but-competitor line also reminds me of Obama, for what it’s worth. 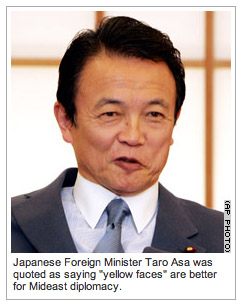 Japanese Foreign Minister Aso Taro is in rare form, even for his inflammatory self. Making a case for the potential for Japanese diplomacy in the Middle East, he asserted that skin color would be a major advantage:

“Japan is doing what Americans can’t do,” the Nikkei business daily quoted the gaffe-prone Aso as saying in a speech.

“Japanese are trusted. If (you have) blue eyes and blond hair, it’s probably no good,” he said.

“Luckily, we Japanese have yellow faces.”

Folks on the CNN website posting a Reuters story picked a photo of Aso looking particularly pugnacious, and to add insult to injury, they fought back by spelling his name wrong in the caption!

Photo in context after the jump.

END_OF_DOCUMENT_TOKEN_TO_BE_REPLACED

“Another new core policy will be added to the basis of Japan’s diplomacy, strengthening the Japan-U.S. alliance and enhancing relations with neighboring countries, including China, South Korea and Russia,” Aso said at a lecture organized by the Japan Institute of International Affairs at a Tokyo hotel.

Aso said the government would:

None of this is ground-breaking, but in English, the new “arc” sounds awkwardly similar to the Greater East Asian Co-Prosperity Sphere (大東亜共栄圏), which isn’t exactly a memory Japan needs to conjure in its neighbors.

It is an imaginative exercise to read speculative accounts of Sino-Japanese relations from earlier in the Koizumi years. No one knew just how bad it would get in the public sphere, and I find that most writers at the time imagined the Koizumi administration and China’s new leadership under Hu Jintao beginning in 2002 would work it out better than they did.

Leave it to an empirical analysis to get a pretty good idea of what was going on. Ming Wan, writing in July 2003 in the Woodrow Wilson International Center for Scholars Asia Program Special Report [pdf], laid out a prescient assessment of the U.S. effect on Sino-Japanese relations and suggested the United States would be wise to work toward reduced China–Japan tensions.

We know what happened instead: Sino-Japanese diplomatic relations are at the height of dysfunction, and only now with Koizumi’s departure is there a feeling of hope, however muddled by Prime Minister Abe Shinzo’s support of Koizumi and the continued presence of the Koizumi’s inflammatory foreign minister Aso Taro.

Aside from his unheeded advice, Ming Wan presents some interesting statistical findings based on numerical measures of political, security, and economic ties. Among the findings in my notes after the jump:

The essay is delightfully well-organized, so allow me to outline his points quickly