Anyone who has watched airfare prices between the United States and East Asia in recent years has noticed a pronounced rise. A year ago, this correspondent found it more affordable to fly from Beijing to Istanbul and then Istanbul to New York instead of a direct flight.

Data prices from Singapore, Hong Kong, and Tokyo to Los Angeles have dropped significantly over the last year: 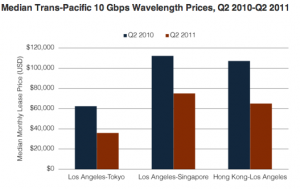 Data from TeleGeography’s Wholesale Bandwidth Pricing Database reveal that trans-Pacific circuit prices have plummeted over the past two years. Between Q2 2009 and Q2 2011, the median monthly lease price for a 10 Gbps wavelength from Los Angeles to Tokyo fell 63 percent, from $98,500 to $36,000. Prices are tumbling on other trans-Pacific routes, too: Over the past 12 months, median 10 Gbps wavelength prices from Los Angeles to Singapore fell 33 percent, while Hong Kong-Los Angeles 10 Gbps prices declined 39 percent.
Median Trans-Pacific 10 Gbps Wavelength Prices, Q2 2010-Q2 2011

For selfish reasons, I would prefer airfare to drop as well. But for environmental reasons, and for the purposes of a faster and more reliable transpacific internet experience, I’m glad to see this infrastructure coming online.

[1] The Trans-Pacific Express was originally slated for completion before the 2008 Olympics, but it is notable as a direct U.S.–China link, which required FCC approval.

Anyone living in China and communicating with the Western Hemisphere or Europe knows that even when government controls aren’t slowing down the internet, any disruption of undersea fiber optics in the Pacific can bring traffic to a crawl.

From MIT’s Technology Review, via Japan Probe and Foreign Policy, comes a map of global fiber projects slated and in progress. This is a screenshot of the Pacific, taken from TR‘s global interactive map.

According to the article accompanying the map, global international transmissions are about 11.0 terabits per second. As I wrote at Sinobyte, one cable is supported by Google, Japan’s KDDI, and others. Another, the Trans-Pacific Express, recently won approval early this year from the U.S. Federal Communications Commission.