Gina Russo at Frog In A Well has an interesting post drawing a tentative parallel between US conservative groups that advocate “the teaching of Western culture and a triumphal interpretation of American history” (in the Times‘ summation) and Republican era Chinese textbooks that included instruction on how to be a “good citizen” (好公民).

My sense is both phenomena are interesting, but as Gina points out they may not have much to do with each other. On the US side, I’m more concerned with a “triumphal interpretation” of US history (whose triumph is it?) than I am with the teaching of Greek philosophers and European political theorists. That’s mostly because you can teach these thinkers alongside more recent theorists without damaging anyone. However, if in the example of the history of the North American west courses had to preclude Patricia Limerick’s Legacy of Conquest in favor of Frederick Jackson Turner (in pursuit of triumphalism), then students would miss out.

Since I’m presently studying in various ways both the question of “civil society” in China and the formation of a sense of nation in early 20th century China, these textbooks are equally interesting. The behavioral aspects, such as lessons on proper posture and how to stand quietly in line, are especially interesting given the preponderance of civility-promoting (usually 文明 or “civilization” was the watchword) advertising campaigns in Beijing during the year leading up to the Olympics. While I heard little about the “no spitting” regulations that received so much attention in the US press, subway passages frequently featured signs encouraging people to stand, civilized, in line.

A key difference between these two examples might be this: US conservatives seem dissatisfied with changes in their country as articulated by changes in ideology among some academics, whereas some aspects of the Chinese campaigns seem directed against the state of affairs in China in favor of a perceived civilized other. I am not in a position to make that argument regarding the Republican era, but in the contemporary example at least part of the impetus for these campaigns was clearly the desire to make a good impression during the Olympics.

It had been on my mind since Tobias at Observing Japan noted Japan’s erstwhile distinction as the holder of the most U.S. Treasury bills. He was discussing Niall Ferguson’s column, named with the “unfortunate word” Chimerica, and noted: “Ferguson does not mention that Japan holds more US treasuries than China, meaning that surely US-Japan bilateral negotiations are no less necessary thank US-China negotiations.” (He noticed the news, and updated the post.)

China’s now the leader, but at least if we judge by dollar holdings, Japan still deserves attention.

China is the hot new place to study abroad. That’s the headline The New York Times culls from the Institute of International Education’s new report on educational exchanges between the United States and a battery of other countries. But China is still only the fifth most common destination for U.S. students, and is still second to India in sending students to the United States.

Some people like to make arguments about what one country thinks of another by how many students go there. Certainly, there are likely to be consequences if large numbers of students from one country study in a particular other country, but it’s hard to know the causes. This passage from the country fact sheet on China from IIE suggests that politics are relevant, at least in some cases.

If we compare U.S. students’ destinations, both China and Japan appear to be gaining popularity. China comes in fifth (after the U.K., Italy, Spain, and France), and Japan 11th. Both countries gained over the previous year—China by 25.6 percent and Japan by 13.6 percent, beating the overall increase of 8.6 percent. The Olympics should not be a factor here because the most recent data in the IIE fact sheet is 2006/07. This perhaps lopsided but concurrent increase in interest is bourne out in language enrollments, at least at Harvard University, where a professor mentioned in a speech some weeks ago that both languages had grown enrollments significantly.

What, if anything, does this tell us? On its own, not a lot. But I’ll give you a little more. More students from the United States are going to Japan and China, but among the top 20 destinations, several other countries also beat the 8.6 baseline increase: Spain, France, Argentina, South Africa, Czech Republic, Chile, Ecuador, and India. Only Asian countries and Saudi Arabia beat the 7 percent overall increase in number of students studying in the United States.

China is working on the world’s first anti-ship ballistic missile, according to some defense analysts. Tobias Harris writes that the ASBM may be based on an existing missile that has a range of 1,800 km, and he notes that such a missile would threaten U.S. ships based in Japan.

While it may be hard to target a ship at sea, he writes, minimal effort would be needed to learn of a ship’s landing at U.S. bases in Japan. Tobias writes:

The question I have is whether the Chinese ASBM will render US naval forward deployments in Japan obsolete, in that homeporting an aircraft carrier in Yokosuka may leave it vulnerable to a crippling first strike before even leaving port. Are anti-ballistic missile deployments in Japan — both by the US military and the Japanese Self-Defense Forces — reliable enough to protect US forces while in Japanese ports?

If not, hadn’t the US and Japan be having a serious discussion about the impact of China’s ASBMs on the future of US forward deployments in Japan, and with them, the future of the US-Japan alliance? Should the US consider relocating more assets from Japan to Guam to put them out of the range of ASBMs?

Of course, many in Japan are not enthusiastic about the U.S. military’s continued presence. Both advocates of Japanese military independence (not likely any time soon) and those opposed to U.S. military actions have spoken up. If this strategic environment were realigned by a new type of missile, perhaps they would be happier.

My question, however, is What are the implications for the U.S. if basing in Japan were reduced and ships in the western Pacific had to launch from bases like Guam and Hawaii? Would this strain the situation with Taiwan? Would it make it more difficult for U.S. ships to be in the neighborhood for humanitarian aid during catastrophes like the 2004 Tsunami?

As Tobias notes, U.S. ships can increase their readiness for this type of attack, but resources would be diverted from other functions. 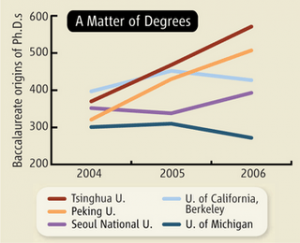