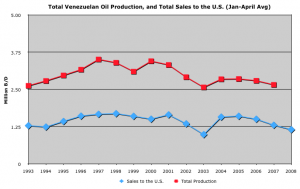 Is China buying 250,000 b/d or more of Venezuelan oil? If so, does that purchase explain declining sales to the United States? Or would sales have declined anyway, as a result of falling production in Venezuela? What is the role of Chávez’s oil donations to countries throughout the region? Perhaps there are other explanations. If the United States wants control over how much oil it buys from Venezuela, the answer is critical. END_OF_DOCUMENT_TOKEN_TO_BE_REPLACED 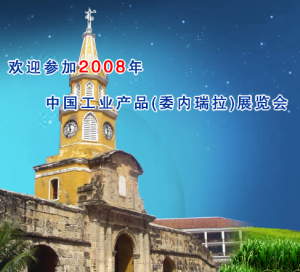 Chinochano notes [es] that most visits by foreign heads of state to China result in the same press release, names changed. In Spanish from the blog, here are the two hypothetical* examples.

The sentence in bold had caught my eye in an English release when Bush and Hu last met. Without looking it up, it says that Hu “expressed his appreciation for United States/Venezuelan support of the ‘one China policy.'” Just thought I’d post this, as it seems to me that the United States, long walking a diplomatic tightrope on the issue, is one of the biggest substantial factors in why Taiwan remains how it is—despite decades of lip service about “one China.” Doesn’t mean you don’t get thanks for lipservice though.

* I had failed to make clear that these aren’t real releases. I’ve been fooled before, but this was just sloppy writing.