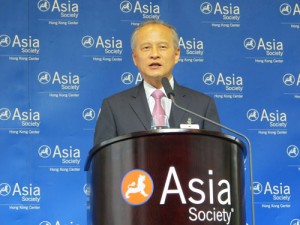 For a while now, G. John Ikenberry’s article in the January/February issue of Foreign Affairs has been on the reading lists of those who watch Chinese–U.S. relations. Its title does not lack for gravity—”The Rise of China and the Future of the West: Can the Liberal System Survive?”—but its argument is perhaps a bit less uncertain. “The United States’ ‘unipolar moment’ will inevitably end,” he writes. “If the defining struggle of the twenty-first century is between China and the United States, China will have the advantage. If the defining struggle is between China and a revived Western system, the West will triumph.”

After this pithy formulation, the possibility of the “West” not surviving is not given much space. Ikenberry argues that the international institutions in the era of U.S. dominance are fundamentally different from other orders that have been challenged by rising powers. The United Nations, the Bretton Woods institutions, and the security pacts that enlace the earth, are portrayed as too open to be overthrown. He writes: “[I]f a country wants to be a world power, it has no choice but to join the World Trade Organization (WTO). The road to global power, in effect, runs through the Western order and its multilateral economic institutions.”

And that’s what Ikenberry thinks China is trying to do. For the full argument, give the article a quick read.

There is one interesting passage worth highlighting. As Ikenberry argues that 20th century international institutions were designed to be open, he notes a difference of opinion between Franklin Roosevelt and Winston Churchill on the composition of the U.N. Security Council…

In fact, it was Roosevelt who urged—over the opposition of Winston Churchill—that China be included as a permanent member of the UN Security Council. The then Australian ambassador to the United States wrote in his diary after his first meeting with Roosevelt during the war, “He said that he had numerous discussions with Winston about China and that he felt that Winston was 40 years behind the times on China and he continually referred to the Chinese as ‘Chinks’ and ‘Chinamen’ and he felt that this was very dangerous. He wanted to keep China as a friend because in 40 or 50 years’ time China might easily become a very powerful military nation.”

This issue of Foreign Affairs has other China articles worth checking out too. While it’s the current issue, those pieces are here.

The English version of the Asahi Shimbun article about the U.S. action against China in the WTO over intellectual property has a pretty obvious headline: “WTO complaints against China put Japan in a bind.” It addresses the fact that the U.S. government asked Japan to join the action (and they haven’t decided yet as far as I’ve seen), and how that’s kind of awkward when Chinese Premier Wen Jiabao is in Tokyo for a “thawing” visit.

But the final two paragraphs seem to make a point of sticking it to China more than the United States:

Honda Motor Co., for example, has won a suit against a Chinese company that made “Hongda” motorcycles. In the 10 years ending in January, Chinese authorities acted on about 2,000 cases of intellectual property rights violations involving Honda products and technology.